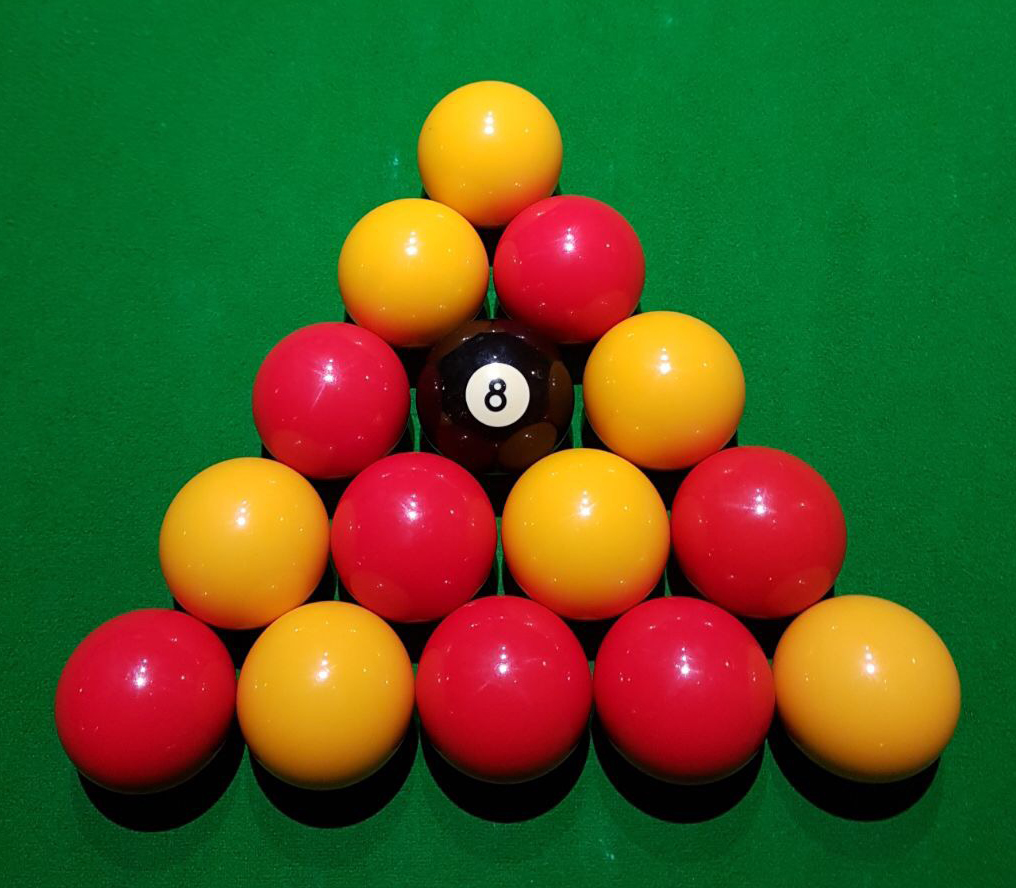 1. Object of the Game

The game is played with 15 balls and a cue ball. The balls must comprise 7 plain red balls and 7 plain yellow balls plus a black (“8”) ball. At some venues 7 “spot” balls and 7 “stripe” balls are used in place of red and yellow, this is acceptable. The player(s) pocketing their group first in any order and then legally pocketing the black ball wins the game.
The balls are racked in the same order as shown, with the top ball on the spot.

a) The order of play is determined by the toss of a coin. The winner has the option of breaking or requesting his opponent to do so.

b) The opening player must play at the triangle of object balls using the cue ball from anywhere on or behind the baulk line.

c) The opening player must hit the pack, and at least two racked balls must touch any cushion from the break. If not, this is a foul shot and his opponent is awarded two free shots. The opponent has the option to restart (re-rack) or play on from such a foul shot.

d) If a player pockets a ball from the break then that ball indicates:

i) The player’s group, and

ii) The pocket in which the player has to pocket legally the black ball in order to win the game.

e) i) If, on the break, the black ball is pocketed, all balls must be re-racked and the game restarted by the same player

ii) If, on the break, a player pockets both a red and yellow ball, then the first ball down denotes the player’s group and the player continues the break – i.e. this is not a foul shot.

f) If, on the break, a player goes “in-off” with the cue ball as well as potting a ball rule 2d still applies but the player concedes two free shots to his opponent.

g) If no ball is pocketed from a legal break, then the player’s alternate shots until a ball or balls are pocketed. If then one ball from each group is pocketed at the same time no foul is committed and play continues with the player been on the group of colours which was pocketed first.

a) If a ball or balls are pocketed legally, the player continues the break until either:

i) The player fails to pocket one of his/her group of balls, or, having potted all the balls in the group fails to pot the black ball, or

ii) The player commits a foul.

b) Combination shots are allowed provided the player hits a ball from his/her group first.

After any foul the offending player loses his/her turn at the table and the opposing player is entitled to either one or two free shots.

a) Pocketing an opponent’s ball gives two free shots with one exception, which is where both the following apply:

i) A player has pocketed all of his/her nominated group of balls and is therefore playing the black ball, and

ii) If the black ball is played legally onto one of the opponent’s group of balls pocketing that ball only into the nominated pocket of the player on the black, this is a one free shot only foul – i.e. end of break.

b) Two Free Shots. The following fouls all award two free shots to the opposing player. However, if a ball is pocketed with the first free shot then the player loses the second free shot and merely continues the break.

ii) Hitting an opponent’s ball before hitting his/her own

iii) Failing to hit any ball

vi) Ball off the table:

a) If not the cue ball, the ball is to be re-spotted on the head spot or as near as possible on a direct line between the head spot and the centre of the back cushion.

b) If the cue ball, it must be played from any position on or behind the baulk line

c) In the event of two or more balls leaving the table they will be replaced in the following manner. If one ball from each player leaves the table then the person who has not committed the foul will have their ball replaced on or as near to the headspot as possible on a direct line between the headspot and the centre of the back cushion, his opponents ball will be replaced as near to the headspot as possible in a direct line with the centre of the back cushion without touching another ball. vii) If a player’s clothing or body touch any ball, whether the ball moves or not.

viii) Player not having at least one foot on the ground

ix) Striking any ball but the cue ball with the cue

x) Playing out of turn

xi) Playing before all balls have come to rest

xii) Playing before any ball has been re-spotted

xiii) Interfering with the movement of a ball with body, clothing or cue

xiv) Striking the cue ball with the cue more than once

xvii) A trial for this coming winter league season 2017/18 is an introduction of a stop clock for the doubles frames only, this will consist of a 3 minute shot time. The referee will give a warning after 2 minutes has gone with the one minute remaining to take the shot, if the shot isn’t taking in this time then a foul has been committed and two free shots awarded to the opposing players. Note a digital stop watch is to be used only.

a) When a player is snookered after a foul stroke (i.e. the player is left without a full ball view at any of his/her balls), the player may:

i) Nominate one of the opponent’s balls or the black ball as being one of his/her group. The player must play the nominated ball without penalty but must not pocket that ball, but may play that ball onto any other ball or combination of balls and pocket his /her ball legally
or

ii) Request that the cue ball be picked up and then play it from anywhere on or behind the baulk line without loss of the two free shots.

a) If a player pockets the black ball before pocketing all the balls in the players nominated group, the player loses the game.

b) If a player pockets the black ball into a pocket other than the player’s nominated pocket, the player loses the game.

c) The black ball must be pocketed on a separate stroke, i.e. if a player pockets both his/her final ball and the black with the same stroke then the player loses the game

d) If a player pockets the black ball at any time after the break and commits a foul at the same time then the player loses the game.

b) Player in Control. A player is deemed to be in control of the game from the time that the player addresses the cue ball prior to his/her shot, through the player’s break and up to the time that the opponent addresses the cue ball prior to his/her shot. Any balls which fall into a pocket during this period are said to have been potted by the player and the player is liable for any penalties or benefits normally awarded to him/her for potting that ball or balls as are accorded him/her in the rules of the game.

c) No Legal Shot. If, in the referee’s opinion, the player in control of the table can play no legal shot, an automatic re-rack should take place with the player who originally broke doing so again.

d) Cue Ball in Hand. When a player has the cue ball in hand, the player plays from any position on or behind the baulk line.

e) Potting the Black Ball. When a player has pocketed all the balls in his/her nominated group, the player may only pot the black ball. Pockets are determined by the first ball down at the start of the game. The opponents pocket is diagonally opposite.

7f I) If the black ball roles into the jaws of a neutral pocket when both players are on the black and it is deemed re spottable by the referee per the diagrams marked 7f ii). Then the black will be re spotted one coloured ball width towards the opponents pocket as per diagram 7f iii).

Please note this only comes into play when the black ball is NEUTRAL BAGGED during a black ball game. If the situation arises where the player at the table has coloured balls left, once they pocket their final ball it does not constitute a re spot on their first attempt at the black.

The current ruling 7f comes into play if the referee deems that both players are not attempting to play due to a disadvantage with the location of the balls remaining.

Once both players are in a black ball game this ruling comes into place.  Once the ball is classed as a “Neutral Bag Ball” in the Jaw, the ball will immediately be re-spotted by the referee – one coloured ball width towards the opponents pocket as per diagram.

Please note – this only comes into play when the black ball is “Neutral Bagged” during a black ball game.  If the situation arises where the player at the table has coloured balls left, once they pocket their final ball it does not constitute a re-spot on their first attempt at the black.

One coloured ball width towards opponent’s nominated pocket, in this instance bottom left hand (this diagram is over bottom right hand) 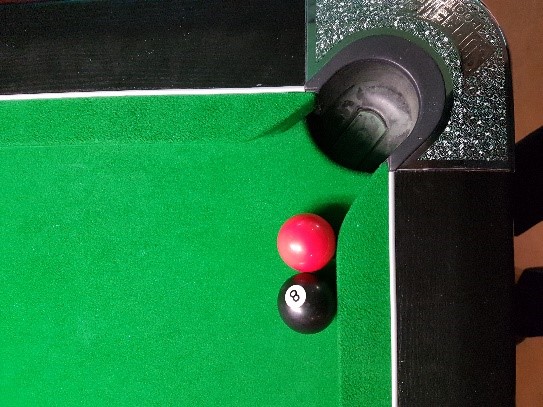 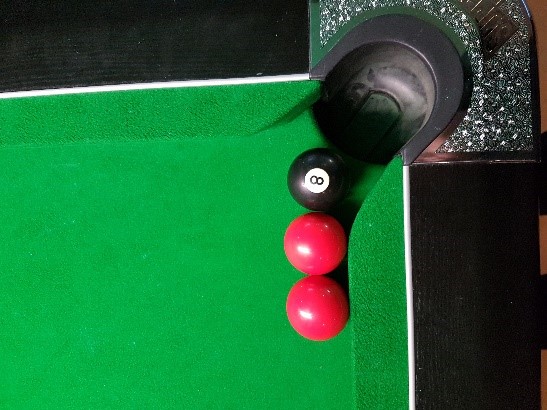 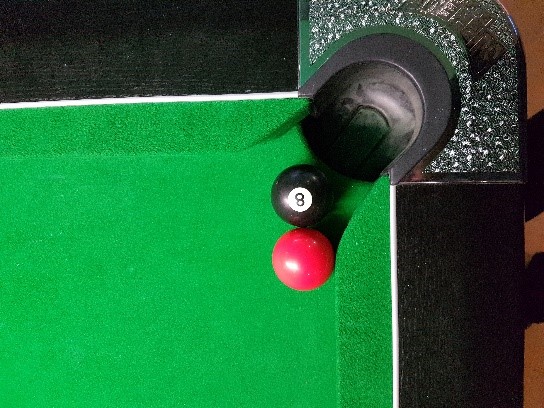 One coloured ball width towards opponent’s nominated pocket, in this instance top right hand (this diagram is over bottom right hand) 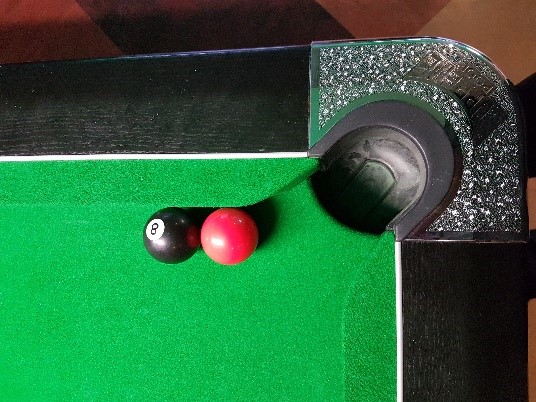 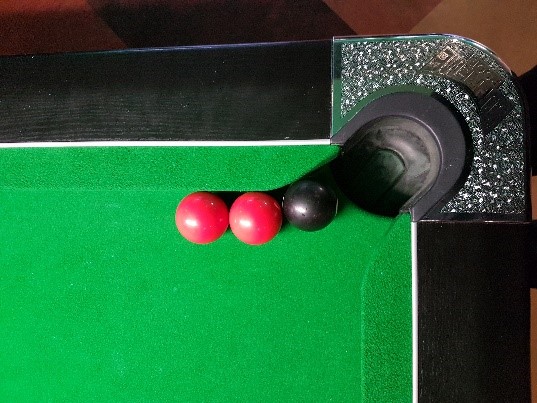 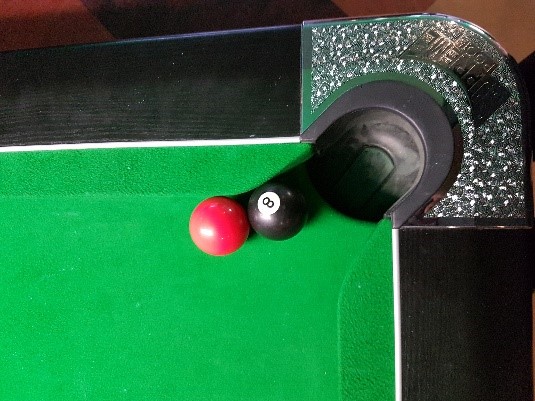 In a scenario where the black is in the neutral bag during a non-black ball game then the re-spot will only happen with the following scenario:-

Both players are seemingly not willing to pot ball or genuinely attempt to clear black in 3 successive visits.  If this is the case then current ruling of 7f comes into play where referee      re-spots on head spot or furthest cushion dependent on bag nomination.

Other scenarios that may arise during a “Neutral Bag Game”

Player remaining on colours will NOT have a re-spot once their final coloured ball is potted as they are midway through a visit.

Please note any attempt by the player on black ball to illegally pot their opponents colour by any means possible (straight in the face, double, treble or mis-cue) to force their opponent on the black will forfeit the match via “ungentlemanly conduct!”